skip to main | skip to sidebar

Save Bletchley Park - the birthplace of computing!

How about the Enigma machines and encryption/decryption?

What about the first computers?

What's the connection between these three?

Bletchley Park. It's a great place and historically very significant - but underfunded and in need of maintenance otherwise it'll be lost forever. Please help save Bletchley Park for future generations. Help support it by visiting - it's a great day out.

If you are an Agile coach - go to the Agile Coaches Gathering which is being held at Bletchley Park.

If you have a programming workshop or tutorial to present at a conference, where people bring their own laptops and you want to give the participants programming things to do, then one of the things that always seems to take more time than you expect (during the session) is setting up environments etc before being able to actually do any programming.

With Stuart Ervine, a colleague of mine who is running a session on GWT at SPA2009 (book now!), we have done some experimenting and now have a setup that I think works quite well - so I wanted to share it here in case it is helpful to others presenting similar sessions.

Having presented "Programming In The Small" (PITS) with Mike Hill at "Software Craftsmanship 2009" I can report that it worked quite well in practice (not perfect though - more on the glitches later).

Stuart and I wanted an identical environment / setup for all of the participants, so time wouldn't be wasted getting everything working on lots of different platforms. Even if you provide one click installers, participants may be understandably reluctant to install some software just for your session. They may even have things installed which conflict with whatever you want to give them. Therefore, we thought it would be better to provide a complete environment - OS and all.

We considered two approaches, providing a virtual image (e.g. VMWare or VirtualBox) with everything installed and configured, or using a bootable USB stick. I attended Lasse Koskela and Markus Hjort's excellent session "Reading Code Without Psychic Powers" where they provided bootable CDs which included the complete environment for several different languages. It worked very well - if rather slow to initially boot up. Having had that experience as a participant, Stuart and I decided to try bootable USB sticks.

First - download the latest Ubuntu (currently 8.10) - and burn it to a CD (good instructions available on the Ubuntu site). Boot your computer off the CD and be patient while Ubuntu starts (it's slow off a CD). These instructions are provided entirely at your risk. 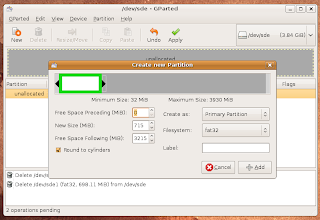 Write Ubuntu onto the USB stick:
Copy programs/files to the other partition:

You can copy whatever programs, files etc the participants need to the other partition (the second one you created). For the PITS session this meant Eclipse, Harmony JDK and an Eclipse workspace with the projects for the session. Running from the USB stick won't be very fast but may be acceptable.

To make your software run faster:

If you want the software to run faster, then set it up for participants to copy to the Ubuntu desktop (where it will be running from memory).

If you want to run memory hogging software from the desktop then participants might not have enough RAM (they might run out of memory and I think the live Ubuntu won't try to use the hard disk for swap space). You can set up Ubuntu to use swap space on the USB stick. To create and mount a 1Gb swap file:

Create an empty file the size of the swap space you want to provide (where /media/disk-1 is where the second partition created earlier is mounted) (this may take a few minutes):

Provide an executable script in the second partition for participants to run if they need swap space, containing:

So far so good - however, you don't want to have to do this for every USB stick you need to create. Having created one USB stick which has everything set up just right, you can copy its entire contents (including partition table) to other USB sticks using the following (where /dev/sde is the "master" USB stick and /dev/sdf is the one you want to copy to):

This copies the first 2Gb from USB stick /dev/sde to USB stick /dev/sdf. In order to make this mass copying faster, for the PITS session we didn't use all the space of the USB sticks. We created the second partition using only part of the remaining space. The numbers for "bs" and "count" were arrived at experimentally to minimize the time it took to make the copies. (Multiply them together to work out the amount copied - i.e. using "bs=4M count=500" copies the same amount, but with my USB sticks was slightly slower). The copying may take a few minutes per stick.

Glitches and gotchas:
Other considerations:

It would have been nice to allow participants to keep the USB sticks but they cost money and we're not working for some large consultancy who might want to do this for promotion.

You need one USB stick per machine (we had participants pairing).

Many thanks to Stuart Ervine for help with working this all out and writing it up. Many thanks to Mike Hill for preparing and co-presenting PITS.